Chevrolet spokesperson Shad Balch swore I would not, could not, bottom out the 2022 Chevrolet Silverado 1500 ZR2 in Joshua Tree National Park during an adventure on ungroomed public trails. Never one to back down from a challenge, I told Balch, “we’ll see.”

For those keeping count, the Silverado will now offer nine trim levels, three cab configurations, and three bed lengths. But it’s the $69,295 ZR2 that will surprise and delight with its ability to deliver off-road capability with ease. It might be the off-road pickup to choose depending on the use case. 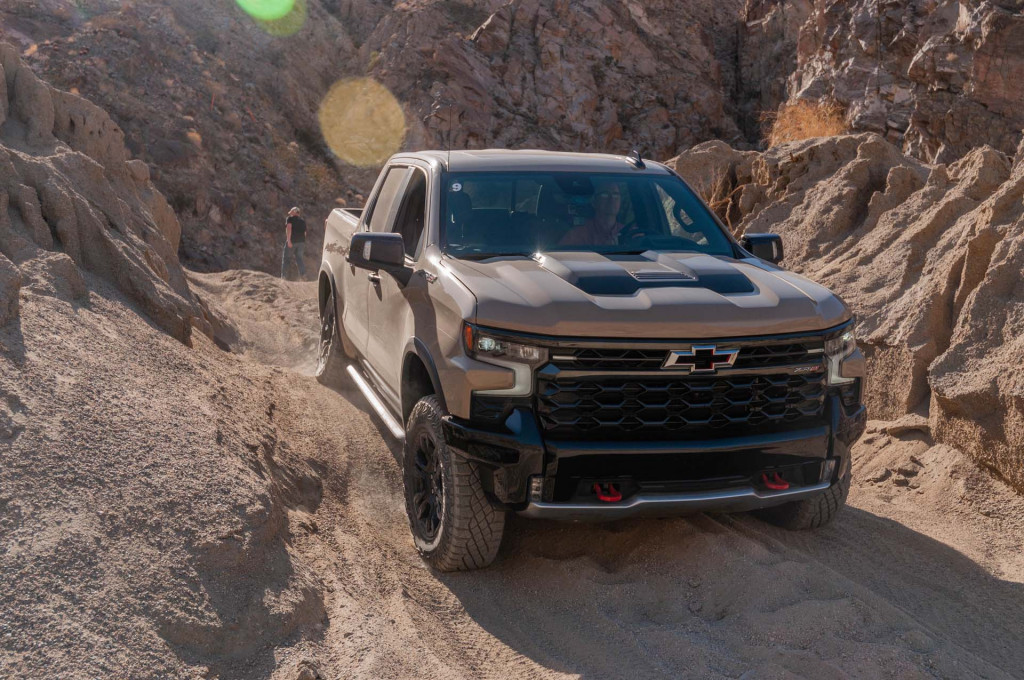 “The LT TrailBoss was kind of an accident,” General Motors Performance Engineering Manager Scott Jonson told Motor Authority between bites of his dinner. That model started life when the performance engineering team set out to create a factory lift kit that would be available for every redesigned 2019 Silverado. The executive team saw it, loved it, and decided to put it into production as a Silverado trim level. The ZR2 started out with the simple idea of building an even more capable off-road truck. 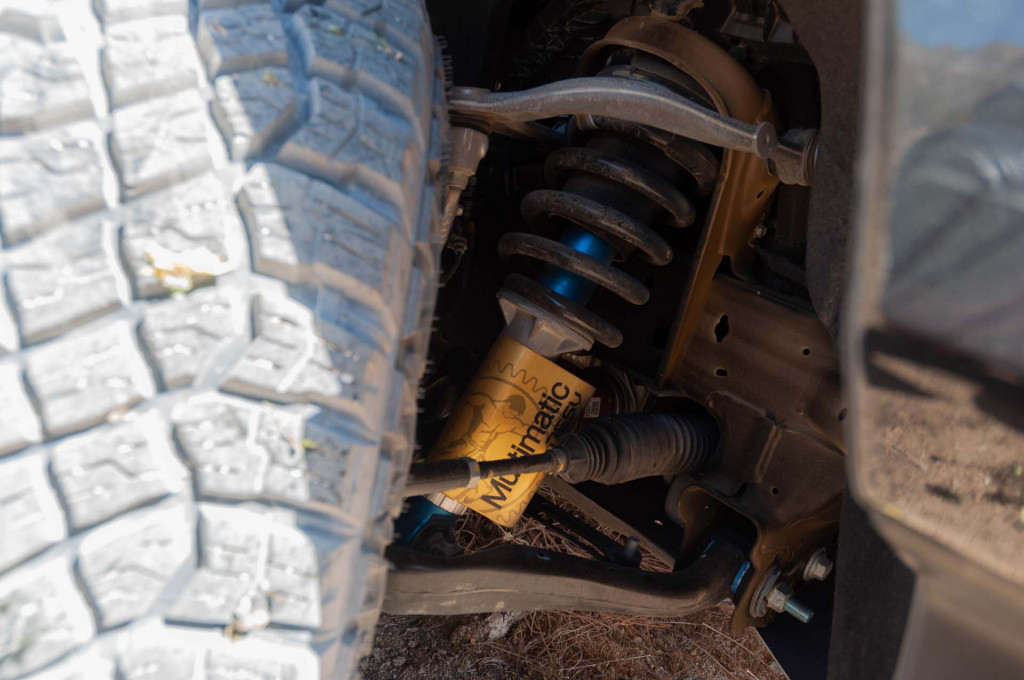 The fancy Multimatic DSSV position-sensitive dampers first seen on the smaller Colorado ZR2 have been ported over to the Silverado ZR2. For the larger, heavier full-size truck, the dampers have been upgraded with better seals, larger and longer 40-mm pistons, and a new tune.

With their gold casings and blue shafts, the shocks are obscured by the 18-inch wheels wrapped in 33-inch Goodyear Wrangler Territory Mud Terrain tires. The rubber is larger, and much quieter, than the TrailBoss’s 31-inch Goodyear Wrangler DuraTracs All-Terrain tires. When asked if 35s would fit, Jonson gave a nod, but don’t expect the factory to offer them because it would require reengineering to solve clearance issues and meet crash test standards. Owners who put 35s on might experience some rubbing or clearance issues. 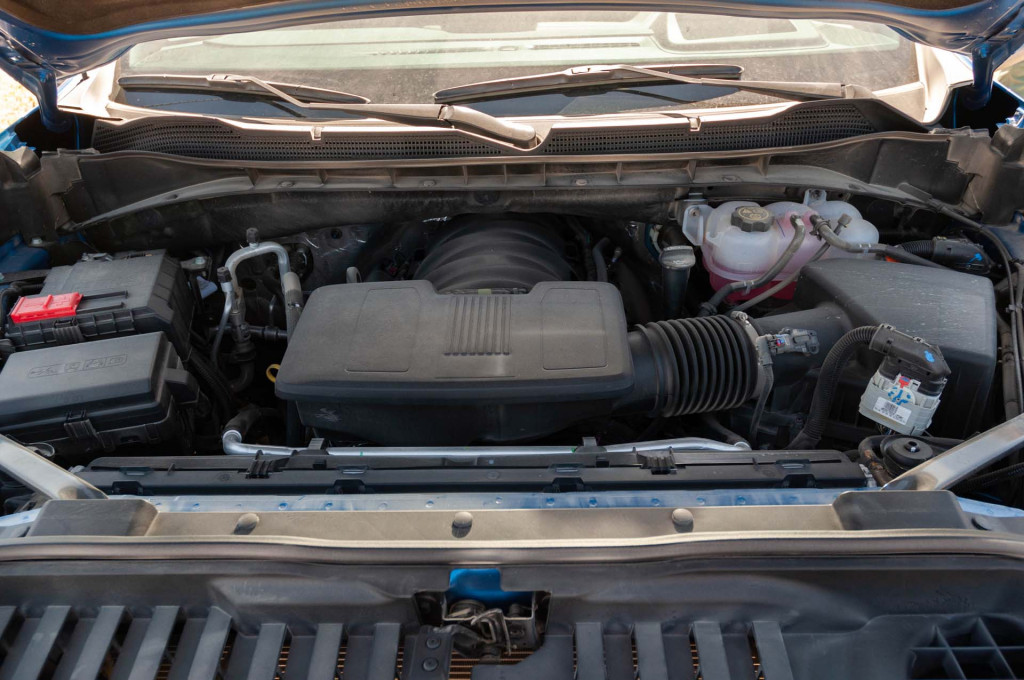 Every Silverado ZR2 is powered by GM’s 6.2-liter V-8 with 420 hp and 460 lb-ft of torque hooked to a 10-speed automatic transmission. The lack of a turbodiesel option comes down to the fight for a business case, according to Jonson.

The naturally aspirated V-8 provides good punch and does 0-60 mph in about 5.5-6.0 seconds according to my butt dyno. That’s just a tick behind the Raptor, but the experience is far more visceral. As good as Ford’s twin-turbo V-6 now sounds, it simply doesn’t emit the deep growl of this big, naturally aspirated V-8 with the ZR2’s available Borla performance exhaust. It should probably be standard, though without any electronic valves it might tick off the neighbors during cold start. 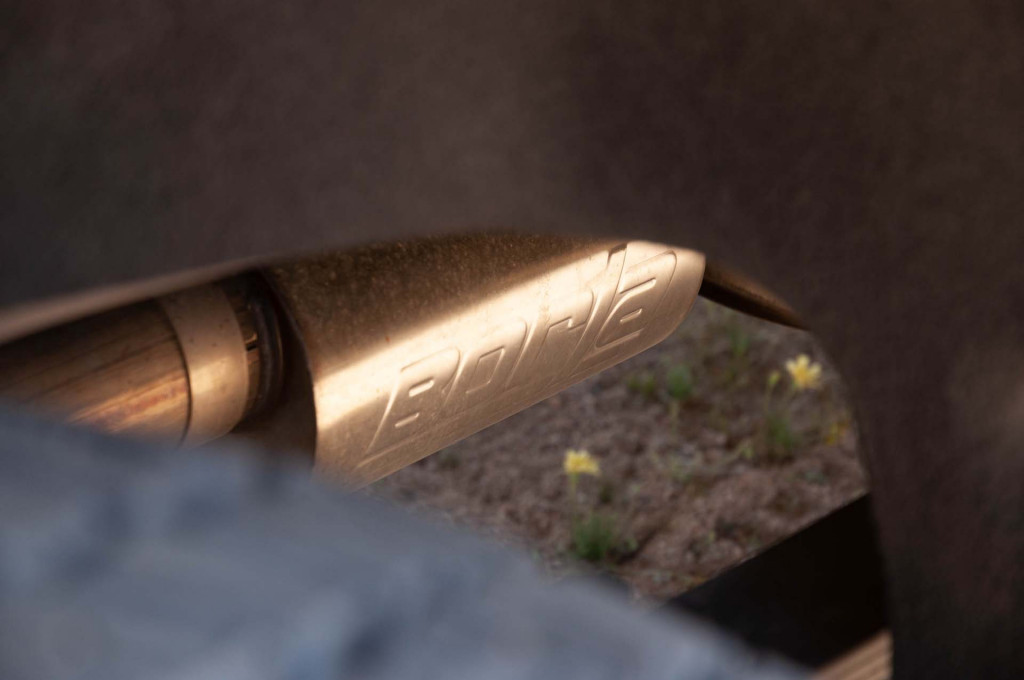 Four-wheel drive comes standard, as do front and rear locking differentials and a limited-slip rear differential. An aluminum skid plate extends from the steel three-piece front bumper—which has removable end caps for better off-road clearance—all the way back to the front transfer case to protect the vulnerable bits.

Balch was confident I wouldn’t bottom out due to the ZR2’s 11.2-inch ground clearance, 31.8-degree approach angle, 23.4-degree breakover angle, and 23.3-degree departure angle. The truck also has 9.8-inches of front suspension travel and 10.6-inches of rear suspension travel to allow for plenty of articulation while keeping wheels on the ground to maintain traction.

The ZR2 is a tweener avove the Ford F-150 Tremor but below the F-150 Raptor in terms of suspension travel and ground clearance, and while the Chevy has better approach and breakover angles, the Raptor has the edge on the departure angle. However, the ZR2’s front and rear lockers give it an ace over the Raptor and Tremor, which only feature a rear locker and a front limited-slip differential. 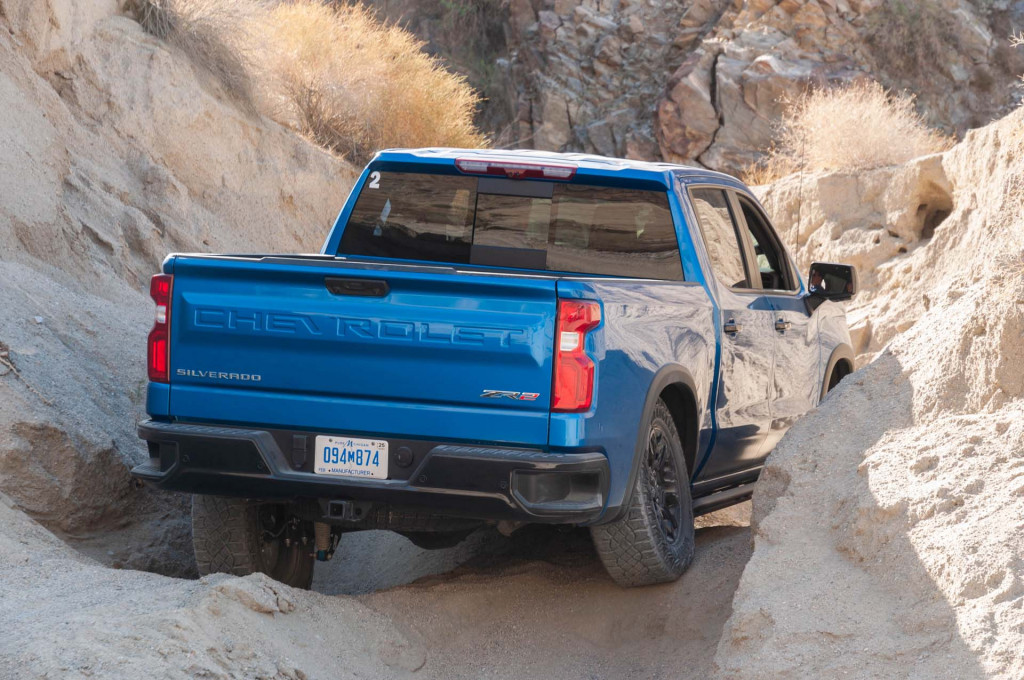 Challenge accepted, and I felt that rock

All of the trucks at the ZR2 media launch in Palm Springs, California, were equipped with the optional $1,095 rock rails and $1,399 Borla performance exhaust system.

After mere minutes on the pavement riding shotgun in the Silverado ZR2 it was apparent that this is the best-riding, most comfortable and controlled production Silverado 1500 money can buy. The Multimatic shocks don’t switch between fancy modes, but they smothered the pavement’s seams and imperfections. Going over undulating pavement never upsets the ZR2 and it doesn’t shudder, jitter, or get out of shape in any way. It’s just planted. I’ll reserve final judgment for broken Midwest pavement, but the ZR2 seems to strike a unique balance between absorbing impacts without being as soft and cushy as the Tremor, Raptor, or Ram TRX while offering a softer ride and more compliance than the firm and somewhat jittery TrailBoss.

Soon we arrived at Joshua Tree, where Chevy reps aired down the tires before we embarked on a hill climb.

Deep pockets were dug into the earth as lesser trucks had clawed and spun their way up the hill. With no lockers on and just 4Lo engaged, the ZR2 climbed, but not without kicking up a bunch of dust and rock in the process like the trucks before it. With both the front and rear lockers engaged, the ZR2 clambered up the hill with zero drama, making a rather hard climb seem simple and uneventful. A Raptor could have made the run as well, but it would have been more harrowing as that truck’s 5.4 extra inches of width would have left mere inches, if that, on either side of the rock-strewn trail. 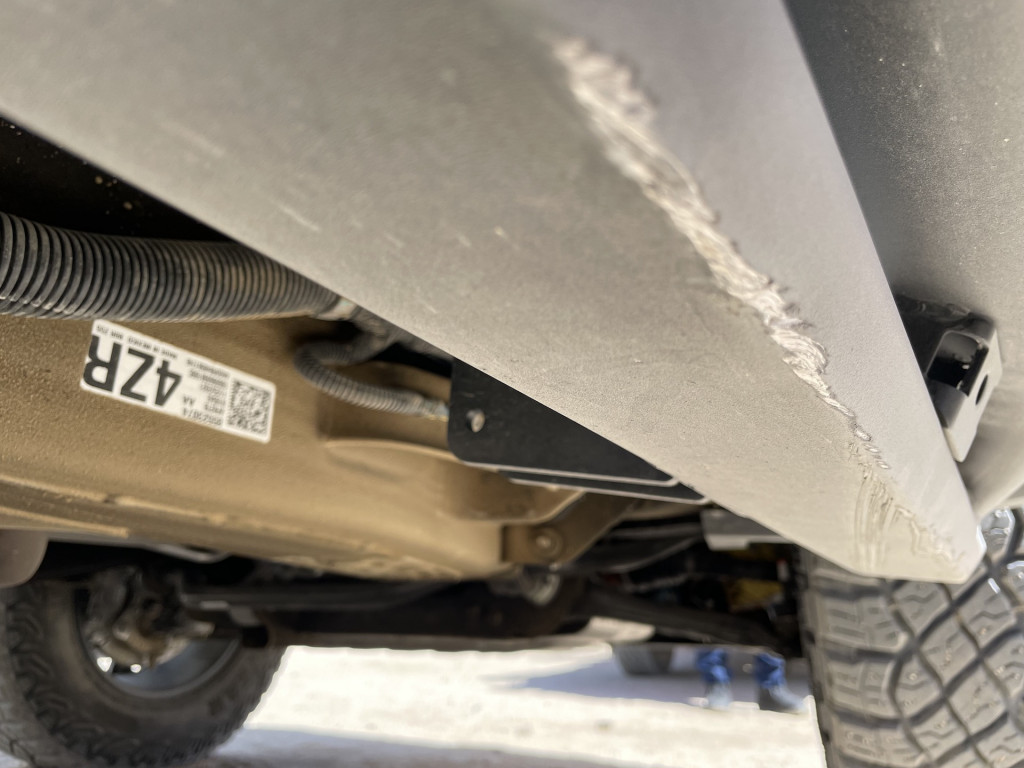 The metal met the rocks when heading down a rock-covered path. As the front right tire crawled over and down a boulder the right side of the truck came crashing down, hard, on another rock. Felt that one. “Balch loses,” I said to my co-driver.

Passing a skull and crossbones sign to warn we were headed to dangerous terrain brought out stories of what had been found on the trails during other adventures (you should hear the one about the Hyundai). With the ZR2 in Terrain mode and 4Lo’s L1 (first gear) engaged, I could drive the truck with one pedal, which made it easier to climb a steep shelf of rocks. The truck didn’t seem to blink as I easily modulated the pedal and it slowly clawed its way up and over the boulders.

On the way to lunch down a sand-covered path, the speed limit sign read 25 mph. The ZR2 didn’t seem to care that we were going 50 mph and never got out of shape as I flung the rear end sideways. It wasn’t as playful as a Raptor on 35s, but it never felt out of control.

After lunch, we faced another hill climb with some tight corners at an abandoned gold mine. The ZR2 made it all feel easy with the front and rear lockers engaged. A Ram Power Wagon could’ve easily covered the same path, but it would’ve felt more unwieldy due to being a larger heavy duty pickup truck. The Raptor would have been a headache as its width would have put the passenger side of the truck closer to the dropoff of the narrow path. 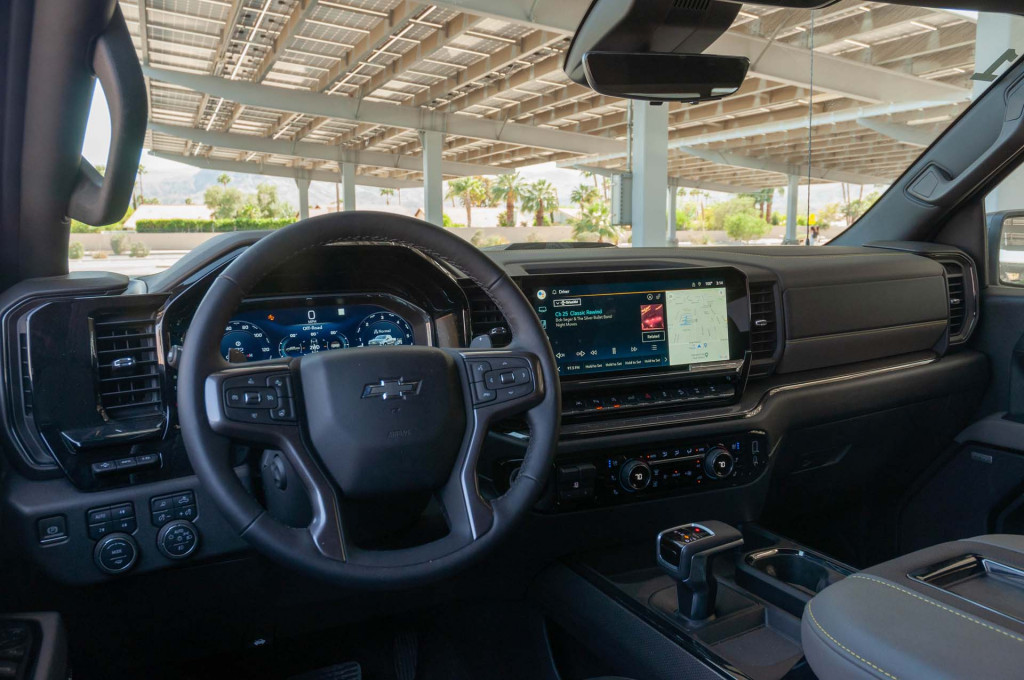 The cabin of most 2022 Silverados has been worked over with a revised dashboard, new seat designs, and new soft-touch materials on LT trim trucks and above. While base WTs and Custom trim trucks stick with the 2021 Silverado’s lackluster interior and 8.0-inch touchscreen infotainment system, the revised 2022s feature a 12.3-inch digital gauge cluster and a 13.4-inch touchscreen infotainment system with built-in Google Assistant. Also for 2022, Chevy introduces a console-mounted, T-shaped electronic shifter that first debuted in the 2022 GMC Hummer EV. 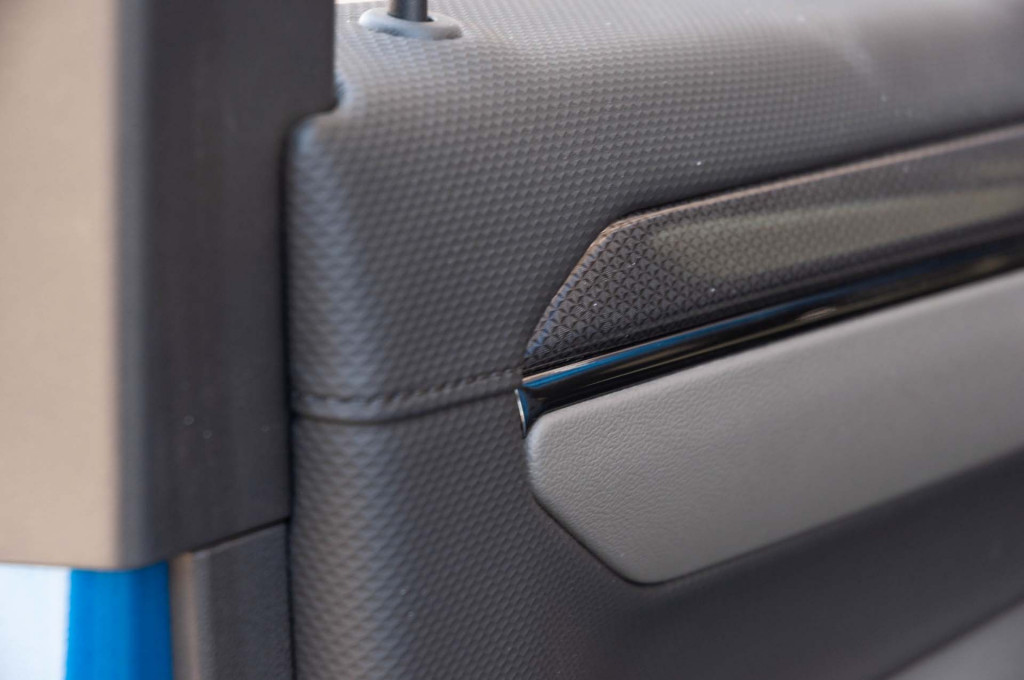 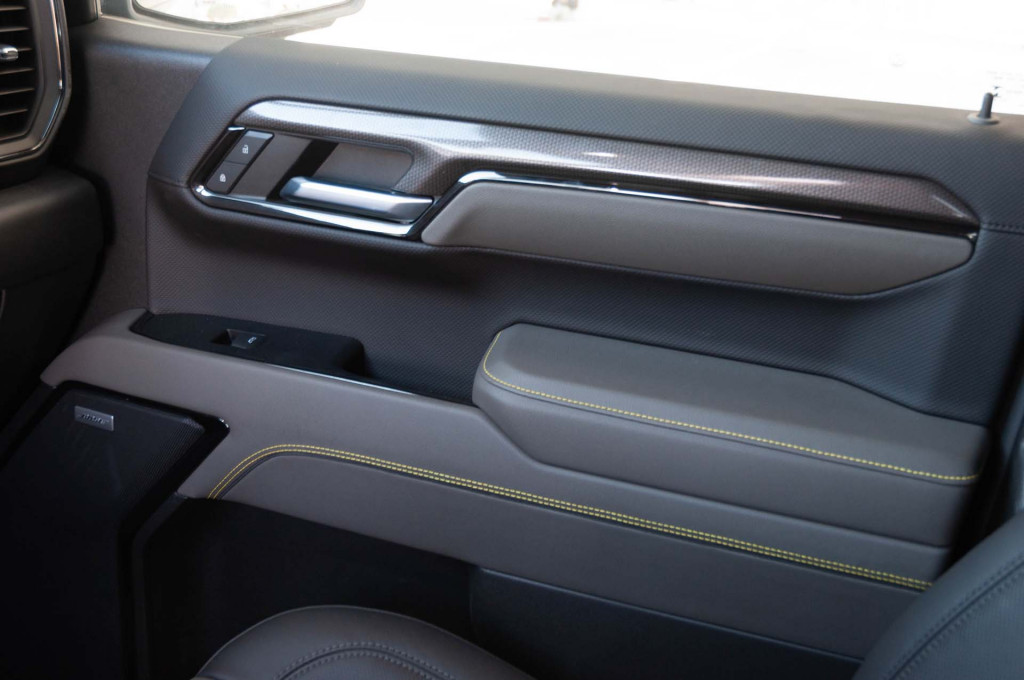 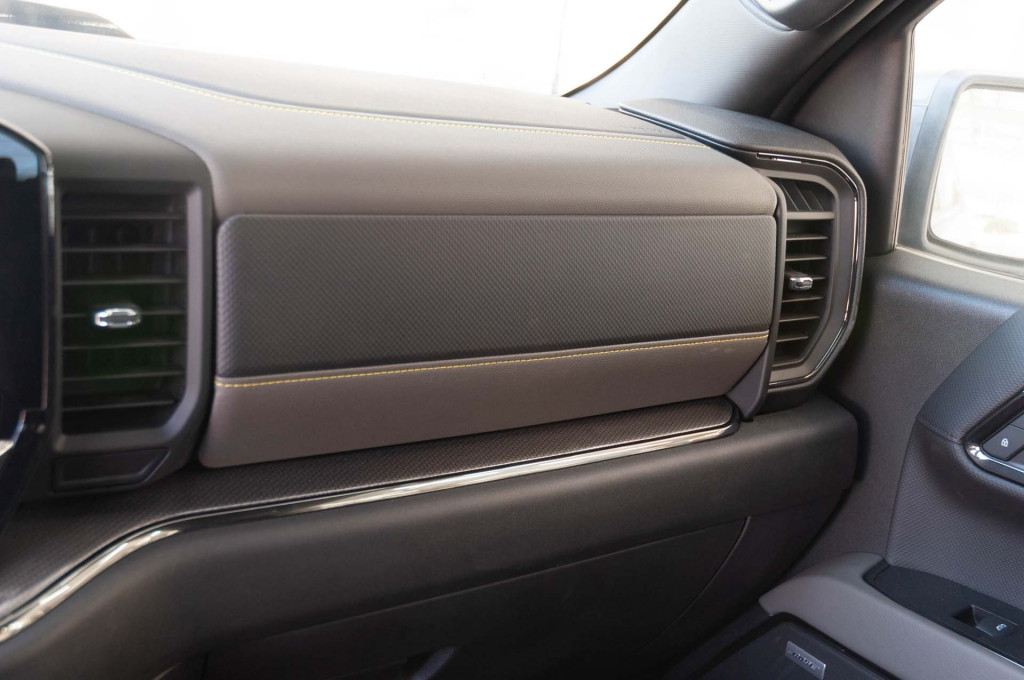 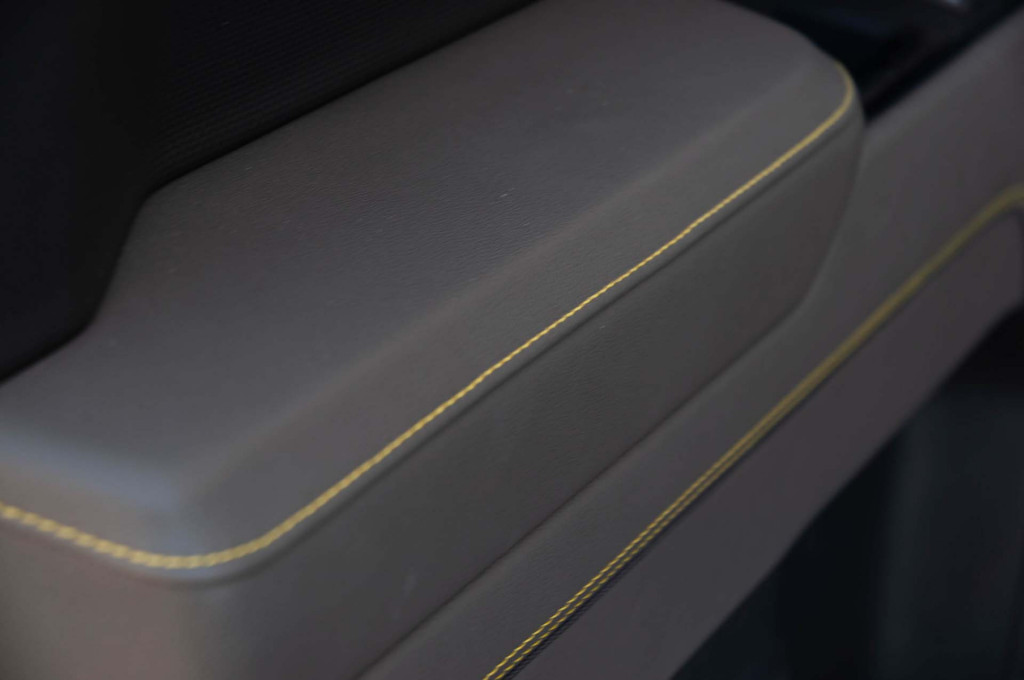 The interior’s design, especially in the ZR2, feels and looks much better. It’s now on par with the Ford F-150, but the Ram 1500’s materials still sit a cut above. However, the ZR2’s cabin looks busy due to so many materials coexisting at once. Eleven different finishes and materials are used on the dashboard, six on the doors, and four on the seats. But the electric yellow stitching provides a sporty touch, and none of the piano black plastic is placed in any high-touch area where it can accumulate fingerprints. 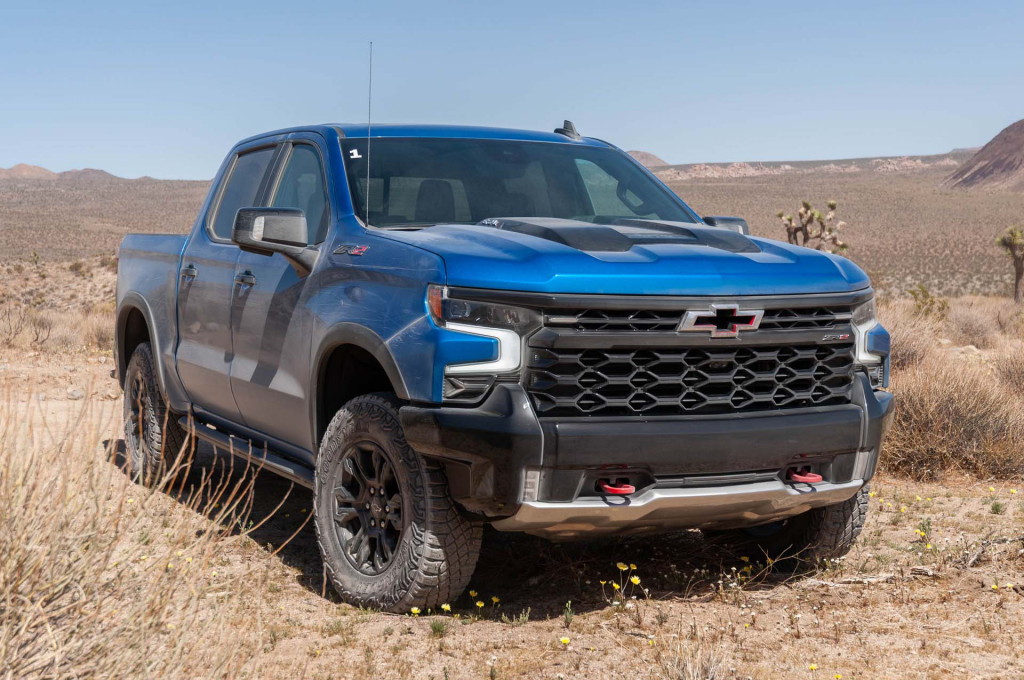 When the drive was done I told Balch about coming down hard on the rock. He was quick to point out I didn’t hit the structure of the truck. The rock hit the rock rail and slid, as intended. He felt he won, but I’m going to call that a technicality. Like my wife, he was right, annoyingly. The truck didn’t get damaged and the rails did their job.

No wider than a standard Silverado 1500 but with more rock-crawling hardware than the light duty options from Ford and Ram, the 2022 Chevrolet Silverado ZR2 is a Goldilocks truck for those who plan to use it as intended off-road, provided sending it off jumps isn’t the prerogative. It’s not that it can do things the other off-road-oriented pickups can’t. It’s that it has the hardware to let it do things with less effort. It also sports the Silverado’s new interior, which is finally competitive, but the rock rails should come standard.

Balch owes me a beer because he lost.

Chevrolet paid for airfare and lodging so Motor Authority could play in the dirt and bring you this first-hand report.