Skip to content
The fiery red electric wonder you see in the cover photo is known as the 2021 Allant+ 8S Stagger. If you’ve never heard of this city slicker, not a problem, but I can assure you that you have heard of its creators. After all, it’s the world-famous Trek we’re talking about.

Now, this beast may not be the most expensive bike from the Trek family, but being an urban e-bike from one of the best teams in the world, it still comes in with a hefty price tag of $4,299.99. Why so much? We’re about to find out.

One thing I need to mention from the start is that even though this bike comes in a bit on the expensive side for an urban e-bike, the frame is not carbon. However, you’ll see that what you’re really paying for are the components and not necessarily the frame. The latter is made from hydroformed aluminum alloy and it comes with a removable integrated battery system, full internal cable routing, and Motor Armor specifically design for one hell of a Bosch motor. 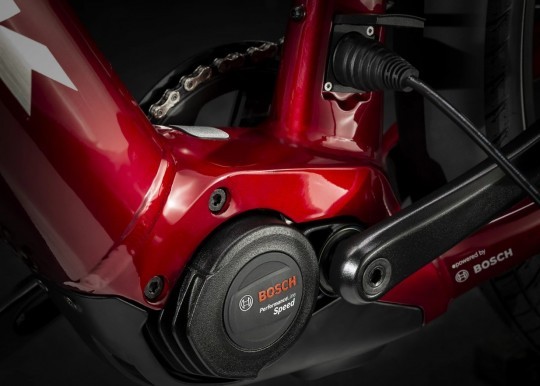 Did you think Trek was going to strap on something other than a Bosch Performance Speed to this bike? No, no, no. It would seem Trek too likes speed and has chosen the strongest of the Performance Line motors. This motor offers a whopping 85 Nm (62 lb-ft) of torque with a maximum pedal assistance of 340%. If that’s not enough, with the 2021 software changes Bosch has made to this motor, you’re now able to catch 28 mph (45 kph) of speed. Nope, definitely not legal in Europe.

To power something this large, we also need a battery to match. Don’t worry, Bosch continues its dominance over this bike with the largest of the PowerTube series, the 625Wh battery. How far exactly you’ll be traveling with this setup is a bit difficult to say as road conditions greatly vary from one ride to the next. But hey, there’s a Range Boost system in place that allows you to strap another Bosch 500Wh battery and nearly double your autonomy. Don’t forget, there are also several ride modes to allow you to control how far you need to go and how fast you want to get there. 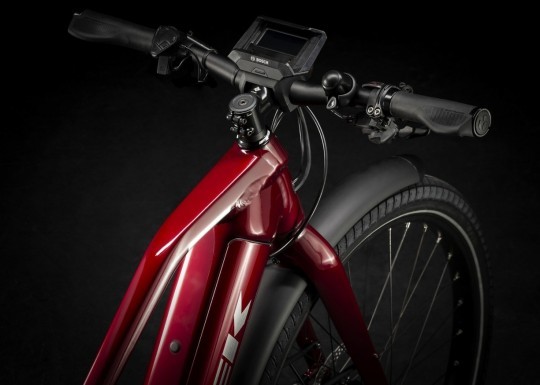 As for the rest of the drivetrain, Shimano comes in with a Deore 10-speed setup. The only components that differ here are the KMC chain and ProWheel crank. Bontrager furnishes other components like the saddle, seat post, handlebar, grips, and stem, which makes sense taking into consideration they’ve been working with Trek for ages before eventually being bought out by the latter. Nonetheless, the brand’s still here.

With everything on it and looking like it’s ready to go, this lion of the urban jungle looks like it’s packed on a few pounds in comparison to other competitors. All in all, it rolls in with a weight of 56.4 lbs (25.58 kg). Not a whole lot more than some of the competition, but the battery will feel it for sure.

Personally, the only thing putting me off from getting serious about this bike and picking one up isn’t the price, but those fenders. Other than that, the frame looks good, with a nice solid geometry for city riding and a stylish down tube, while the components are worth every penny. Want one? Click here and see if it winks at you.