E-bikes are an expensive purchase and even the best budget rides tend to cost £1,000 or more so, unless you enjoy throwing stacks of cash around, it pays to take your time and do your research before taking the plunge.

The boom in electric bikes, however, means there’s a baffling array of choices, all promising the same benefits: to take the slog out of the ride on the commute or to the shops by blending pedal power with a boost of grin-inducing power assistance. Not all budget electric bikes are created equal, however, and so, after some thorough testing, we’re here to separate the wheat from the chaff.

Below you’ll find our budget electric bike buying guide, to quickly bring you up to speed on what features to look out for, followed by our pick of the best budget electric bikes on the market today. So, whether you’re after folding convenience, city speed or off-road performance, you can enjoy an e-bike to suit your needs without breaking the bank.

Best budget e-bike: At a glance

How to choose the best budget electric bike for you

How do electric bikes work?

E-bikes are often described using a variety of technical-sounding terms such as pedelecs or EAPCs (electrically assisted pedal cycles). While potentially confusing at first, the principle is fortunately very simple, with the key word being “assisted”. Electric bikes combine pedals and a motor and the cleverness lies in how the two are blended together.

As soon as you start to pedal, a small electric motor kicks in to help push you along. Stop pedalling and the power fades away (by law you have to be pedalling for the power to work). The vast majority of e-bikes let you alter the amount of assistance available at the push of a button, ranging from a very gentle push to a strong surge.

UK law caps the power output of any electric bike to 250W and their power must peter out at 15.5mph. While this is certainly nowhere near the power available to a moped, for example, it’s extremely helpful for a cyclist, with riders often saying an e-bike is like having bionic legs.

Battery capacity and, therefore, range vary hugely between different e-bike models. Bikes with small batteries are fine for short city hops while those with larger batteries can let you ride all day without needing to worry about recharging. Twenty miles is a realistic minimum range for most battery sizes while the biggest can achieve many times this. Charge times range from around a couple of hours to six or even eight hours, and fast chargers are available, often with the large capacity batteries, to keep times reasonable.

What type of budget electric bike is ‘best’?

The best budget electric bike for you will depend heavily on the kind of riding you want to do. For off-road and muddy country trails, an electric mountain (e-mtb) may fit the bill. If you plan on combining riding with other forms of transport, such as train travel, then a folding electric bike may well suit you. For city and more casual leisure riding, there are step-through frame models, which generally cater to a more easy-going riding style, while crossbar-frame models may tempt slightly sportier riders.

How much should I spend on a budget electric bike?

The short, and usually best answer here is as much as you can afford. While you can find ultra-budget models out there, they are likely to be most suitable only for shorter trips and summer use. The harder an e-bike is used, the more likely you’ll benefit from investing a little extra money.

Is one e-bike motor better than another?

E-bike motors can be divided into two main types: hub motors and mid-drives (also called crank drives). Hub motors, as the name suggests, replace either the front or rear wheel hub with a motor that drives the wheel forward. Mid-drives, on the other hand, are found around the pedal axle. Mid-drives are more complex and cost more to produce but are more effective at hill-climbing and more battery efficient.

Whichever motor you choose it should have a top power rating of 250 watts – the UK legal limit. That might not sound much when you consider it’s around a quarter of the rating of a typical kettle. But don’t be misled by the numbers; peak power is allowed to be considerably more than 250W and on a good e-bike this is remarkably effective at making cycling easy and fun.

At the sub-£1,300 price level you will see a preponderance of budget hub motors which all tend to look very similar. Not all motors are created equal, however, and so when possible it’s advisable to take a test ride to check out how a particular motor handles hills.

What size battery do I need?

Watt-hours (Wh) is the most useful measure of battery capacity and allows a direct comparison between models. An extremely approximate measure of range is to divide the battery capacity by 15 to give its mileage on a full charge. So a 500Wh battery might give in the region of 30 miles in average conditions for an average weight rider. While 500Wh is a good-sized battery, don’t write off smaller ones; they can help keep the weight and price of the bike down and may still offer enough range for your daily needs.

What other features are important features to look out for?

Gearing: While single speeds are fine for flatter areas and moderate hills, multi-geared models are better if you live in a hilly area. Belt drives are replacing the traditional bike chains as they are tougher, lower maintenance and don’t rust. They’re hard to find on budget models but certainly worth keeping an eye out for.

Brakes: Disk brakes are generally more effective than rim brakes and are easier to maintain. Hydraulics are usually better than cable-operated brakes but, as with belt drives, they’re not all that common among budget bikes.

Extras: Mudguards are useful if you plan on going out in (or after) wet weather, hardwired lights are nice to have as you can be sure they’ll operate as long as your bike does, and a good quality kickstand is always a practical addition. 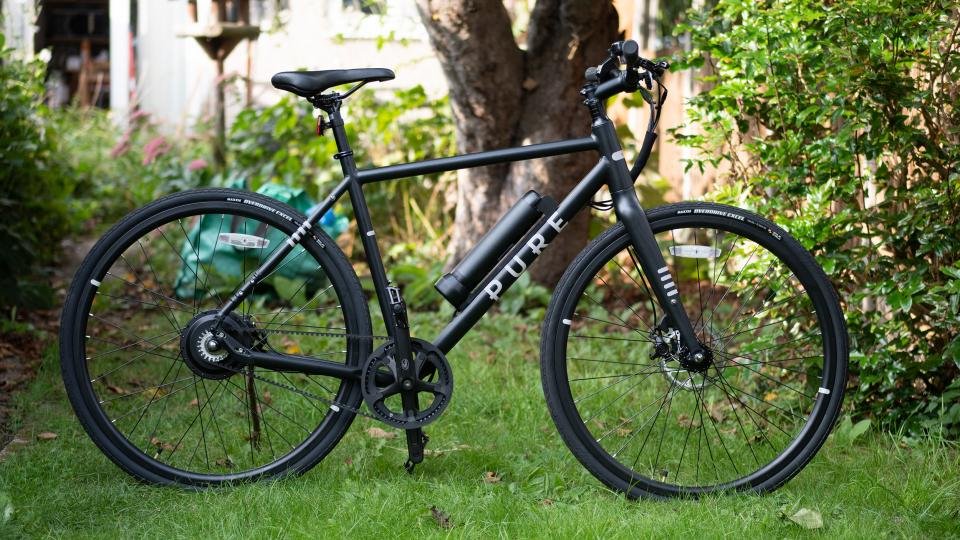 The Pure Flux One is a lightweight e-bike with a belt drive – both features you normally have to splash quite a bit more cash for. It’s great for city hops up to around 25-miles and fast-charging removable 252Wh batteries (up to 80% in three hours) make it an ideal commuter.

It’s reliable too, with a single gear and a carbon belt there are no gear changing parts to go wrong and the belt should outlast a traditional chain (manufacturers Gates quotes a 10,000 mile lifespan), with virtually no maintenance. A neat handlebar display lets you toggle between three power modes (9mph, 12.5mph or 15mph) but, being a single-speed, flats and gentle hills are where the Flux One is most at home.

The only real “extra” is a fluorescent paint on the one-size-fits-all frame that makes the bike highly visible at night, so if you want to add mudguards, lights, a rack or a kickstand you’ll need to consider them in your budget. Despite that, the Flux One represents great value for money.

Read our full Pure Flux One review for more details 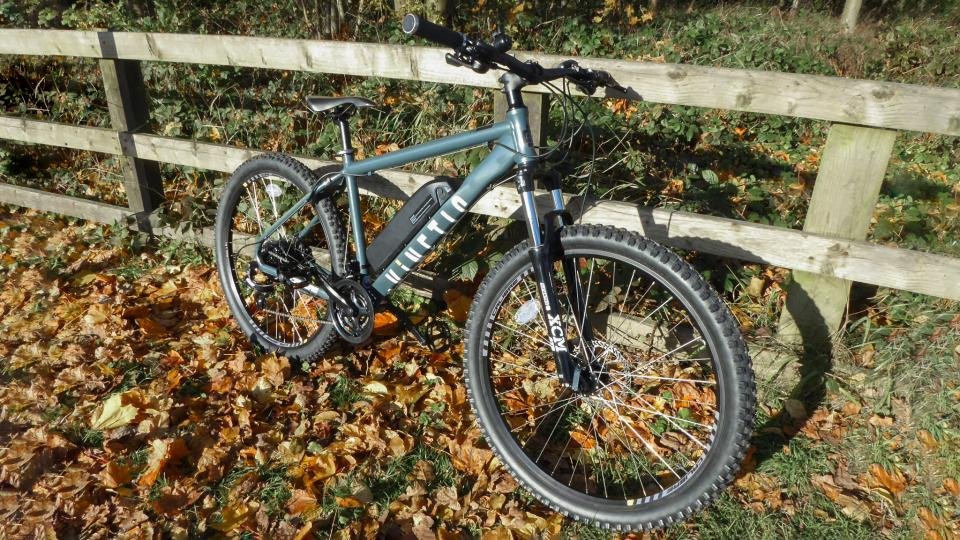 The Calibre Kinetic may be Go Outdoors’ first own-brand electric MTB but the firm has pedigree in the mountain bike arena, having produced the much-feted, non-electric Calibre Bossnut back in 2015.

Like most budget electric mountain bikes, the Kinetic features a rear hub motor (in this case from respected Danish firm Promovec) with so-called cadence sensing that kicks in as you move the pedals. Importantly, it does what it’s meant to on the hills, in my case, turning what might have been a testing trek over Lancashire’s Rooley Moor into a leisurely day out.

My ride over the Northern moors produced an estimated range of just under 30 miles from the relatively small 317Wh battery, with careful use of the five power levels.

Not only does the motor have decent climbing power but the other components also marry together nicely, bringing real off-road ability. There are eight rear derailleur gears, along with three front chainrings – unusual on such a budget bike – allowing you to keep the pedals spinning, and the power coming, even on steep inclines. The budget but well-specced package is completed with Suntour front suspension, Clarks hydraulic disc brakes and Kenda knobbly tyres.

While it’s not designed for bigger, bouldery terrain (you’ll need to spring for a far more expensive full suspension mid-drive bike for that), it’s perfect for country tracks and bumpy trails. 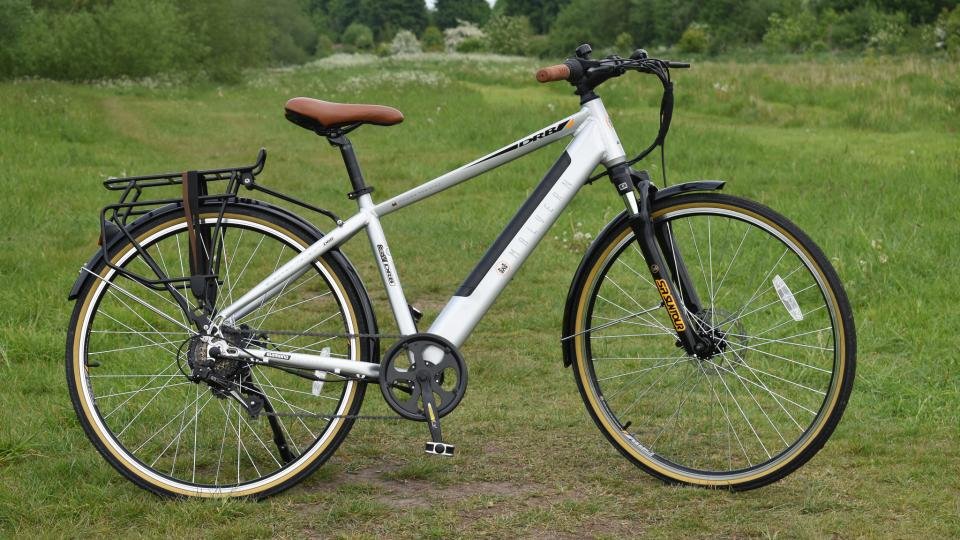 Hardwired lights aside, the Dallingride Malvern is a fully equipped trekking-style electric bike that makes the most of its budget components. It’s one of a range of four new e-bikes from Dallingridge for 2022 and certainly one of the best value for money.

The geared rear hub motor allied with a 12 magnet cadence sensor is smooth in operation and, in my testing, on top power setting breezed up most of the Pennine hills, even conquering a 20% climb while carrying a full commuting load on the pannier rack.

The cable operated disc brakes, six-speed Shimano derailleur gearing and Suntour front suspension all come together faultlessly, again despite their budget credentials. Perhaps best of all, given the relatively low price tag, is that the 504Wh battery offers a range of around 35 miles.

The Dallingridge Malvern is a great mix of sporty yet comfortable and practical yet stylish that will tick many of the boxes prospective e-bike riders will be considering. 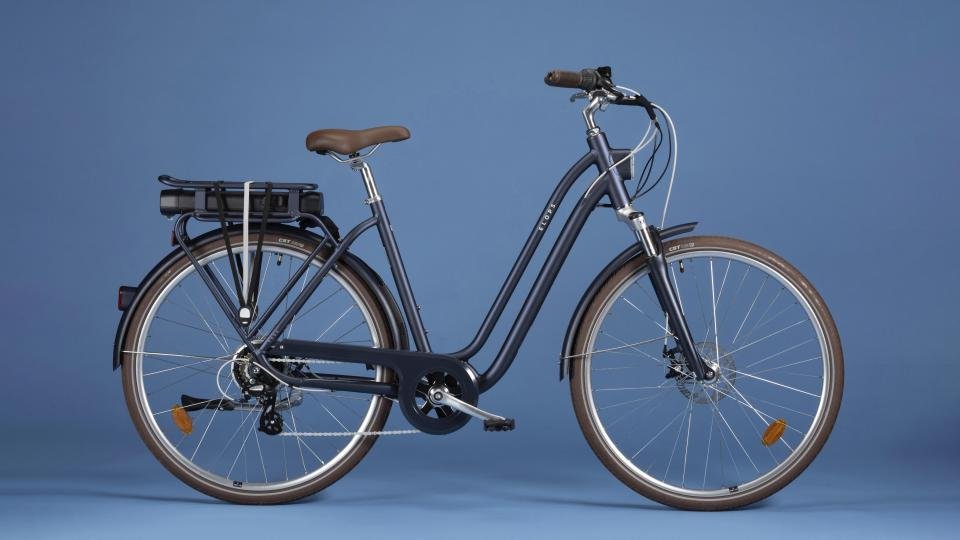 Decathlon has a great track record in producing value for money electric bikes and the Elops 900 E Low Frame is no exception. It’s designed to be as simple to use as e-bikes come, with an easy-to-get-on frame and a full complement of built in lights, mudguards, a kickstand and rear rack.

The rear hub motor is admittedly more at home on gentle hills rather than killer climbs but the generous 417Wh battery gives a serviceable range of around 40 miles and the seven derailleur gears and mechanical disk brakes are reassuringly reliable and easy to use.

Comfort is a keyword for the Elops 900 E. The wide, 28in tyres combined with a front suspension fork can capably handle potholes and rougher roads or even the odd towpath or forestry track. Add on a plush seat, ergonomic grips and upright, comfortable riding position and this is e-biking at its cushiest. 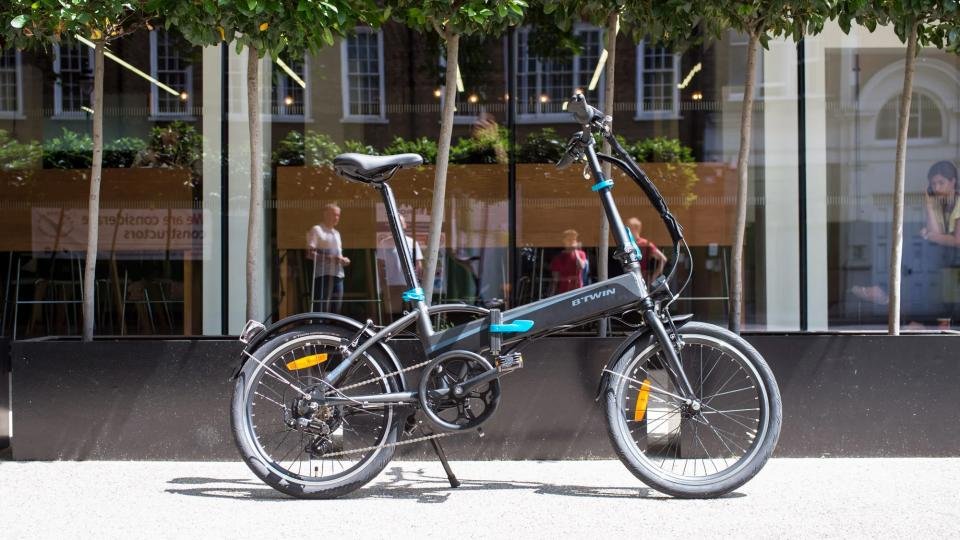 The B’Twin 500E is not only one of the cheapest folding electric bikes you can buy but it’s also a great compromise between all the factors that have to be juggled when designing a decent e-folder. It’s reasonably light, reasonably quick to fold and while it has a relatively small battery at just 187Wh, that capacity is tailor-made for quick city hops – just what such e-bikes are often used for.

You can expect a range of up to around 20 miles per charge. The six derailleur gears work reliably and effectively and mean the rear hub motor can power you up moderate hills with ease. The V-brakes do their job but are clearly there to keep the price down; assuming they are set up correctly disk brakes are always preferable. Other cost compromises are the rather flimsy saddle and pedals.

Hardwired front and rear LED lights, full-length mudguards and a kickstand mean it’s ready to go, whatever the weather, too, although B-Twin’s bespoke pannier rack is an optional extra.