Shares of electric vehicle maker Rivian Automotive (NASDAQ:) have been spiraling lower at such a rapid rate that even the company’s most faithful investors are beginning to doubt whether there will be any success in its future.

The Irving, Texas-based startup has lost more than $120 billion in market value in the four months since it went public on Nov. 10, in one of 2021’s biggest, most watched IPOs. The stock priced at $78 ahead of its IPO but skyrocketed to $106.75 when it debuted. Currently trading at $38.05, that’s a shocking reversal from the post IPO buying frenzy that made Rivian the sixth largest IPO in US market history.

In November, investors were confident that Rivian—which has the backing of Amazon (NASDAQ:) and Ford Motor Company (NYSE:), mega cap companies that have a 20% and 12% stake in RIVN respectively—would be one of the most promising startups to challenge Tesla’s (NASDAQ:) dominance in the EV market.

Last week, the latest evidence of the challenges facing Rivian’s ability to ramp production came when the company released its Q4 and full year 2021 . The company not only missed Wall Street’s expectations, but also forecast just a modest increase in vehicle production for 2022.

Rivian now expects to produce 25,000 electric trucks and SUVs in 2022, just half of the production it forecast last year as part of its IPO roadshow. In a letter to shareholders, Rivian said:

“In the immediate term, we are not immune to the supply chain issues that have challenged the entire industry. Those issues, which we believe will continue through at least 2022, have added a layer of complexity to our production ramp-up.”

Besides the industry-wide supply side challenges auto manufacturers are facing, Rivian also seems to be finding it hard to increase its vehicle prices in order to protect its margins. The company, early this month, was forced to roll back price increases on its debut cars, the battery-electric R1T pickup and its R1S SUV, after customers began canceling their orders.

“With investors increasingly concerned about Rivian’s production ramp combined with its inability to combat cost inflation with price increases, we have trimmed our price target to $47 from $115.”

Still, the average analyst 12-month price target on Rivian is fairly high. Among 15 analysts polled by Investing.com, it’s around $92. 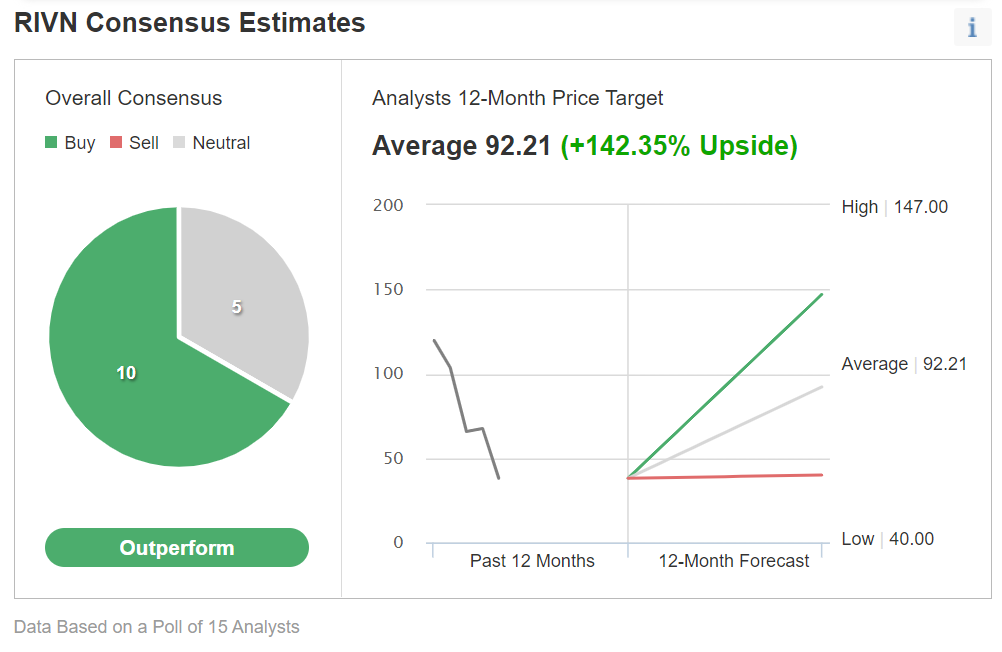 One possible reason for this optimism: despite current problems, Rivian is still considered the best-positioned startup to compete with Tesla in the rapidly growing EV arena. Demand for electric vehicles is likely to remain strong, helped by government subsidies to promote clean technologies and rising oil prices.

That shift, according to many observers, will escalate further amid the ongoing geopolitical conflict which has pushed gas prices to a record high.

Despite the recent setbacks, we continue to believe that Rivian can still be a successful player in the EV market due to its significant lead in the battery-powered pickup truck segment and the backing of the deep-pocketed Amazon.

But investors should also note that it’s going to be a long road ahead for the company, as it now has to bridge the gap between expectations and fundamentals. Scaling production is historically the riskiest part of a company’s lifecycle, and Rivian has many years ahead before it can successfully hit appropriate targets. For comparison, Tesla took a decade to scale up and deliver its first full year of profit.