TOKYO — Prices of one key type of the sensors used in autonomous cars are falling rapidly, raising hopes of accelerating progress in the development of self-driving technology.

Velodyne Lidar, the leading manufacturer of lidar sensors, has developed a product with a price only one-hundredth of those up until now. This dramatic drop in price for the sensors at the heart of many autonomous car designs could rev up the speed of the evolution of self-driving vehicles.

Most of today’s autonomous vehicles are equipped with two key types of sensors: cameras and radars.

Sensors using lidar (light detection and ranging) work like radar systems, with the only difference being that they use laser light instead of radio waves.

Lidar technology uses near-infrared light to detect objects around a vehicle. The advantage of lidar is that it can generate precise three-dimensional images of everything from cars to traffic lights to pedestrians in a wide range of environments and under diverse lighting conditions. 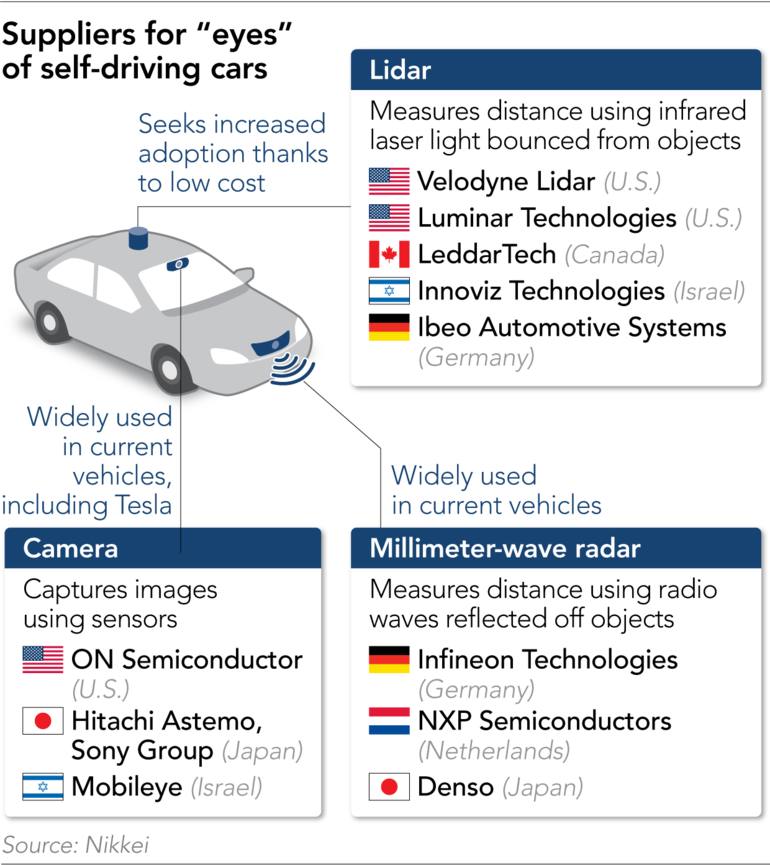 Tesla CEO Elon Musk, however, has famously disparaged lidar sensors, saying in 2019 that they are “expensive sensors that are unnecessary” and likening them to “a whole bunch of expensive appendices.”

Musk has shown such distaste for lidar technology mainly because lidar sensors have been so costly, with a system for one vehicle costing as much as $70,000. He has argued that sophisticated cameras are sufficient for self-driving cars’ vision systems.

Indeed, the biggest hurdle to widespread lidar adoption has been an economic one.

Gopalan asked whether it is wise to rely on just one component for safety. “If you’re driving at 70 miles per hour, or 100 kilometers per hour, you’re taking your hand off the steering wheel and you’re shutting your brain off … can you rely on just one sensor?” he said.

As the costs of lidar sensors decline, they can be combined with cameras to create truly safe and affordable vision systems, he asserted. “If lidar can become small and low-cost, [it will help] create a safe system.” When Google initially started its autonomous vehicle research, it used custom-made lidar sensors from Velodyne. They were rotating models mounted on the roof.

Velodyne has sharply reduced lidar production costs by developing solid-state lidars. This new approach has helped shrink the size of the sensors, eliminate moving parts in the optical mechanisms and enable the kind of mass manufacturing that has brought costs down.

The company’s new model, its smallest so far, could be sold at around $100 in high-volume production. A sensor system composed of multiple lidars is capable of 360-degree vehicle coverage.

As the costs of making lidars fall further through mass production, the total cost of lidars per vehicle will likely fall sharply. “Past 2025, I think you will see the cost of lidars come down even more, in the $700 range” per vehicle, Gopalan said.

Luminar’s high-performance lidar sensors can accurately detect objects ahead of the car out to 250 meters away and grasp the situation around the vehicle with a perception accuracy of several centimeters. The sensors can also detect dark objects, like black debris or a person wearing black clothes, even on roads with minimum reflectivity.

Luminar CEO Austin Russell stresses the crucial importance of focusing on safety in developing self-driving technologies. One accident per 100 people is not acceptable, Russell told Nikkei. The goal should be “to have 99.99999999% — 10 nines of reliability,” he said. Russell was a child prodigy who memorized the whole periodic table at age 2 and made a cellphone on his own while he was an elementary school student. He obtained a patent for a water recycling system he invented when he was 13.

Under the guidance of billionaire Peter Thiel, a co-founder of PayPal, Russell founded Luminar at the age of 17. Following Luminar’s listing on Nasdaq in December 2020 through a merger with a special purpose acquisition company (SPAC) — a shell company that uses the proceeds from an IPO to acquire a private company — he became a billionaire at age 25.

Besides Luminar, more than five other U.S. lidar startups, including California-based Aeva, have gone public via a SPAC merger.

In recent years, progress in autonomous driving technology has been markedly slower than that for electric vehicles. One reason has been a rush of major automakers to expand their EV offerings in response to a global trend toward stricter regulatory restrictions on gasoline-powered cars aimed at reducing carbon emissions.

As their earnings have been battered by the COVID-19 pandemic, carmakers have concentrated their investment on electric vehicles while cutting their R&D spending on self-driving technology.

The walls of national regulations and high costs have also hampered the advancement of autonomous driving technology. But growing competition among Velodyne and its rivals to develop more accurate and less expensive lidar sensors could help the technology overcome these challenges and come into widespread use.

“Various parts with falling prices, such as sensors and cameras, will help remedy shortcomings [of autonomous driving],” said professor Toshio Ito at the Shibaura Institute of Technology, an expert in advanced driver assistance systems. 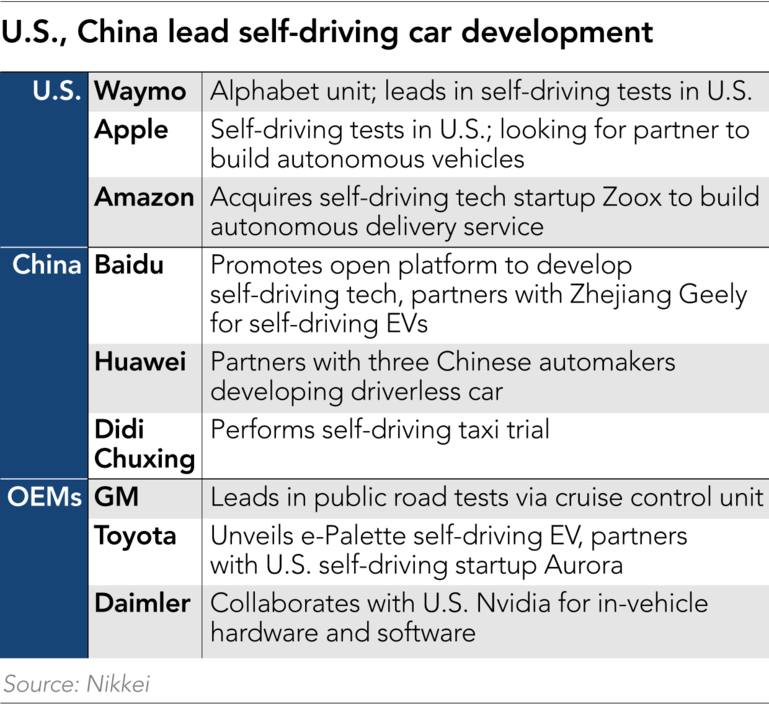 A small number of players, mainly U.S. and Chinese tech companies, are dominating the self-driving business landscape due primarily to its high technological and financial hurdles.

General Motors’ autonomous driving subsidiary, GM Cruise; Waymo, which began as Google’s self-driving car project; and China’s Baidu are leading the pack in terms of testing self-driving cars on public roads in California and other parts of the U.S. They have covered far more distance than Daimler or Toyota.

Apple is another tech powerhouse that is raising its self-driving profile. Since 2017, the Palo Alto, California-based company has been test-driving its own models on public roads around its headquarters. According to documents the company submitted in the past to the state authority, Apple has been testing a Lexus-based self-driving vehicle. A Lexus equipped with self-driving systems provided by DeepRoute.ai, a Chinese company, has been spotted in the area.

Velodyne’s Gopalan welcomes entries by tech companies like those affiliated with Google’s parent, Alphabet, and Apple into the mobility sector.

“Their appetite to adopt new technologies like lidar … is much faster than a traditional automotive [manufacturer]. And so their entry into the space has really forced the rest of the industry to innovate,” he said.

These U.S. and Chinese tech companies, armed with not just accumulated test-driving data but also ample financial and human resources, are likely to remain on the leading edge of the self-driving revolution.