It’s been the stuff of Internet forum chatter for years, and even President Joe Biden has dropped a hint or two, but GM President Mark Reuss on Monday finally confirmed that an electric Chevrolet Corvette is coming.

Reuss made the confirmation to CNBC’s Phil LeBeau during a segment of “Squawk Box,” though he didn’t provide details on timing.

He did however confirm that an electrified Corvette will come first, as soon as next year. It will be based on the current C8 Corvette platform and has been testing on public roads for over a year. One of the prototypes is shown in the teaser video below.

Reuss didn’t state whether the electrified Corvette will be a conventional hybrid or a more advanced plug-in hybrid, though one of the cars that engineers used for benchmarking was an Acura NSX. The Acura is a conventional hybrid, albeit with three electric motors working with an internal-combustion engine, in this case a twin-turbocharged V-6.

The hybrid Corvette, which could be called a Corvette E-Ray, is expected to feature a single motor powering the front axle and the current Corvette Stingray’s 6.2-liter V-8 powering the rear axle, something that’s backed up by the teaser video which initially shows the front wheels spinning under their own power. Peak output in the car is expected to fall between 600 and 650 hp. A more powerful configuration is expected during the C8 Corvette’s product cycle, with rumors pointing to it appearing in a range-topping variant to be called the Corvette Zora.

As for the electric Corvette, President Biden first mentioned the car during his campaign trail, claiming he’d been told that it was in development, and that it would be capable of 200 mph. He then added last summer that he’s been promised a drive in one. 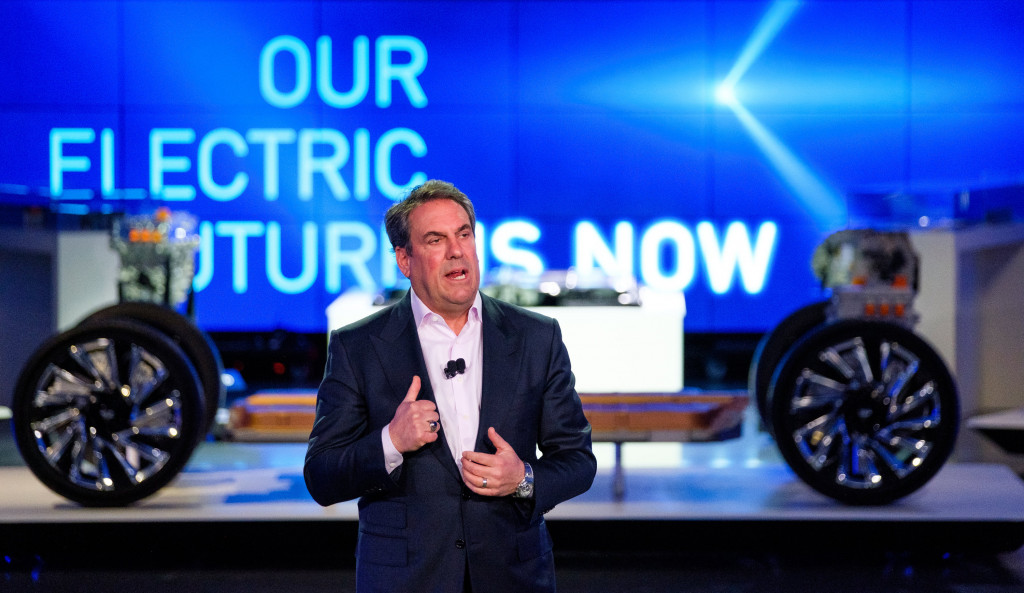 Reuss via a LinkedIn post made on Monday said the electric Corvette will use GM’s Ultium EV platform and battery technology. The first Ultium-based vehicle is the 2022 GMC Hummer EV which in top configuration has 1,000 hp and can hit 60 mph from rest in just three seconds. Considering the Hummer EV weighs over 9,000 pounds, a potentially lighter electric Corvette should be considerably quicker.

Reuss in his post also revealed that the Ultium platform has an energy recovery system that can draw energy from the heat generated by the batteries. This energy can then be used to warm the cabin, create more efficient charging conditions, and boost range by up to 10%, he said. The energy can also be used to increase acceleration, according to Reuss.

News of an electric Corvette shouldn’t come as much of a surprise considering GM last year said it was aiming to have all of its light vehicles powered by electricity by 2035. What might surprise some is that we may eventually see the electric Corvette lineup expanded with additional body styles, such as an SUV. However, nothing on that front has been confirmed yet.