Each Wednesday this time of year, around 200 mountain bikers of all ages and skill levels hit the dirt at Riverside State Park.

Many adults then cap off the night with a beer while children drool over the prize table.

“The beer garden is like an English pub,” organizer Gino Lisiecki said. “Everyone talks about how good or bad they did.”

Lisiecki and Eric Ewing took over the event, dubbed Wednesday Night Mountain Bike Races, from the Spokane Parks and Recreation Department more than 15 years ago.

Ewing said they quickly learned they could set up a mountain bike course in a couple of hours at Riverside State Park that would take riders 30 minutes to an hour to complete. He said it took seven hours to set up a course at Beacon Hill, where the city hosted, that bicyclists finished in 20 minutes. Riders have pedaled at Riverside State Park the last decade and a half.

The nine races during May and June range from 6 to 10 miles. Some ride two laps, so their mileage doubles to 12 to 20 miles.

Lisiecki said the course, which was 8.3 miles long Wednesday, gets longer and tougher each week.

Lisiecki said they race in May and June to avoid the dry, dusty trails, hot weather and fire dangers that result in the summer.

“May and June have always been really good for us, except for last June,” Lisiecki said.

While they are called races, not all ride fiercely.

“I guess that’s kind of the beauty of our program here is this is really something for everybody,” Ewing said.

Russ Schwartz, 69, said he’s been riding at the Wednesday races for about six years. He said he loves riding with friends, watching the youth riders improve and drinking beer afterward.

“I do it for fun and it’s all about pushing myself,” Schwartz said.

Schwartz also serves as president of the Riverside State Park Foundation, whose mission is to bring awareness to the park and raise money for things at the park, such as a recently installed water fountain. Wednesday’s races are great for the park, Schwartz said.

Dave Braun, 57, said he’s been riding the Wednesday races for about 12 years, with the exception of the past two years because of the pandemic and a busy work schedule.

“It’s great hanging out with my tribe because it’s been a couple years,” Braun said.

He said he likes the competition the races bring but that he mostly races against himself.

“I think it’s kind of a nice reprieve in the middle of the week for everybody, just a quick break,” Jonathan Klesch said.

Henry Klesch said he’s been riding on Wednesdays the past few years.

He said the races provide good training and experience for his son and his racing team.

He said he planned to ride with his son, who was not there Wednesday, this week.

Ewing said 200 racers participated Wednesday and they haven’t had fewer than that since last year.

Lisiecki said there were 30 to 50 riders when he and Ewing took control of the series. He said he believes the growth in ridership is because they can ride as hard or as easy as they want, they can bring their families and the races don’t tie up weekends.

He said Spokane’s population boom and the pandemic pushing more people to parks and bike riding has also led to more riders on Wednesdays.

Ewing said he never expected the amount of people that rode at the event 15 years ago to be riding with their children now.

Ewing said many riders complete the course by 7:45 and end up at the beer garden. Several youth riders often gaze at prizes.

“Standing in the doorway of my trailer and just looking out across all of that and kind of knowing that we created this fun for people on a Wednesday night, that’s the satisfying part for me,” Ewing said. 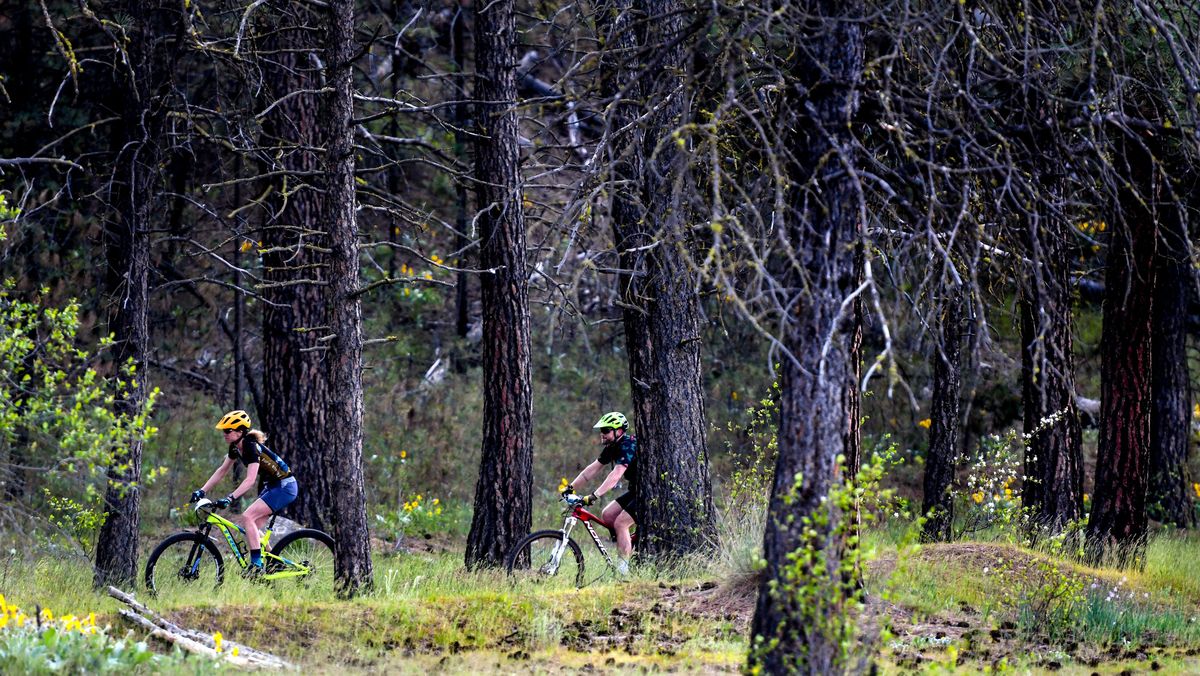 Racers make their way through the course during the Wednesday Night Mountain Bike Races at Riverside State Park on Wednesday, May 18, 2022. (Kathy Plonka/The Spokesman-Review)