The electric car sector is becoming increasingly crowded as more tech companies jump on the bandwagon, pushing a radical shake-up of the 138-year-old global auto industry.

Chinese smartphone giant Xiaomi is the latest newcomer in the electric vehicle, race with a plan to invest $10 billion over the next decade. At a March event unveiling the company’s plans, billionaire founder and CEO Lei Jun called the new initiative “the most significant decision in Xiaomi’s history” and said it will require “full efforts for at least five to 10 years.”

Rumors of Xiaomi’s push into carmaking have been around for a while as the world’s third-largest smartphone manufacturer faces growing pressure to find a new source of growth outside the saturated phone market. The initiative reinforces a trend among tech companies to bet on a revolutionary transition to electric vehicles that are increasingly autonomous and connected.

The world’s largest smartphone maker, Apple, is reportedly pushing to design an electric vehicle and batteries, aiming at a possible 2024 launch. The U.S. gadget maker’s biggest chip supplier, Foxconn, has also been bulking up its automotive capabilities. Last October, it unveiled an open and customizable EV software and hardware platform called MIH.

Telecom equipment giant Huawei Technologies, which is suffering under U.S. sanctions that crippled its phone business, has partnered with Beijing-based EV manufacturer BAIC Blue Valley to launch a luxury electric car equipped with Huawei’s smart driving system. The car, which is set to hit the market April 17, has added to speculation that Huawei will eventually build its own cars despite the company’s repeated denials.

As new players and investors join the fray, China’s EV market, already the world’s largest, has heated up again in the past year after nearly three years of cooling amid a broader slowdown in the country’s auto market.

The revival is partly inspired by the success of U.S. EV specialist Tesla, which has enjoyed strong sales growth, helped by its less-expensive, made-in-China Model 3. Tesla’s 2020 global sales topped 500,000 vehicles, while the company’s market value surged 743% to more than $800 billion, exceeding the combined market capitalization of established auto giants Volkswagen, Toyota and Daimler.

Chinese EV startups including Nio, Xpeng and Li Auto also embraced investors’ growing enthusiasm and debuted on U.S. stock markets. The market value of Nio, which suffered a capital crunch that pushed it to the brink of collapse less than two years ago, topped $100 billion in January, making it the world’s third-most valuable carmaker after Tesla and Toyota. 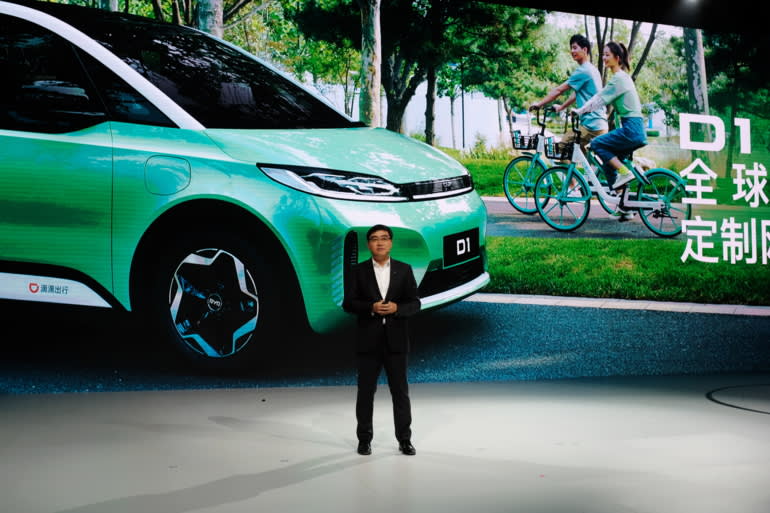 What has led the EV sector to pick up steam? The EV market entered a new stage after years of customer education and supply-chain development by early players such as Tesla, according to a Baidu representative.

New technologies also are driving a major restructuring of auto manufacturing by introducing standard technologies and components, lowering the barriers tp entry in automaking. As the auto supply chain becomes increasingly standardized and consolidated, producing a car will be more like making a smartphone, experts say.

“In the new era of carmaking, manufacturing will be only one part of the long business chain involving software services, after-sales services and even financial services,” one smartphone company source said. “Device makers can tap the market at many places.”

Chinese customers’ appetite for electric cars is expanding quickly. According to the Ministry of Public Security, new registrations of EVs totaled 466,000 vehicles in the first quarter this year, up 295% from the same period last year and 87% more than the same period in 2019. The country’s total EV registrations reached 5.5 million autos as of March.

China’s new-energy vehicle sales, including EVs and hybrid-electric cars, increased 11% to 1.4 million vehicles in 2020, according to the China Association of Automobile Manufacturers (CAAM). The organization predicted that annual sales will top 5.4 million cars by 2025.

The robust growth partly reflects policy support for new-energy vehicles as China pursues ambitious goals to reduce emissions of carbon dioxide, the main greenhouse gas contributing to climate change. According to an industry development plan issued by the State Council in November last year, the share of new-energy vehicles in China will expand to 20% in 2025 from 5% in 2020, an increase of 6 million autos. By 2035, purely electric cars will become the mainstream of new car sales in China, according to the document.

Amid the government push, China will embrace a boom in EV manufacturing with several producers and suppliers growing into global leaders, Swiss investment bank UBS Group said in a report. The country will account for nearly half of global EV production by then, UBS said.

Xiaomi placed a big bet on electric smart car building after months of deliberation, according to Lei. The company will set up a new smart car division with an initial investment of 10 billion yuan ($1.5 billion) and will invest $10 billion in the new business over the next decade, the company said.

Lei said Xiaomi will use its own money to fund the new business. With 108 billion yuan of cash and cash equivalents as of the end of 2020, Xiaomi is capable of underwriting the costs of developing the car business, Lei said.

Xiaomi’s new carmaking unit has yet to complete the process of business registration, and more details await discussion, company sources said. In the March statement, Xiaomi said Lei will head the new unit.

Lei set his eyes on EVs years ago. He was an early buyer of a Tesla when the U.S. startup first entered China in 2013. In subsequent years, Lei and his Shunwei Capital invested in domestic EV startups Nio and Xpeng, as well as several autonomous driving-related companies.

Xiaomi has also been preparing for its EV foray for years. A patent database shows that since 2012, Xiaomi has obtained more than 300 car-related patents covering wireless communication, data processing and transmission, driving control systems and navigation.

Xiaomi has built up an ecosystem connecting a wide range of smart devices. Although Lei has emphasized that Xiaomi is an internet service company, device manufacturing remains the company’s main revenue source, generating nearly 90% of sales. But the profit margin of Xiaomi’s device businesses is less than 15%, far lower than the internet industry average of 40%.

Xiaomi reported strong smartphone revenue of 152.2 billion yuan in 2020, an increase of 24.6%. The growth came mainly from sales overseas, as Xiaomi took over market share from sanctions-hit Huawei. But the global smartphone market is highly competitive and sales are close to peaking, forcing device makers to find new growth sources, experts say.

In an internal email, Xiaomi identified autos as one of three future business pillars, along with smartphones and semiconductors, several Xiaomi sources told Caixin.

Other tech giants are also pushing into the auto business. Baidu unveiled its plan in January to partner with Geely in making electric smart cars, marking a major change in the search engine giant’s previous auto business strategy, which focused solely on autonomous driving system development.

Baidu and Geely in March completed business registration of the new venture, Jidu Auto, in which Baidu holds a 55% stake. Jidu is set to release its first model in three years. A Baidu source said the time frame is likely to be shortened once the company streamlines the product design and production arrangements.

Alibaba made even earlier moves to partner with auto manufacturers to tap the EV market. In 2015, the e-commerce giant set up a 1 billion yuan joint venture with SAIC to develop the smart auto control system AliOS. The system has been installed in SAIC’s MG RX5 models.

Alibaba also placed its EV bets on Xpeng, taking a 14.4% stake in the company, the second-largest in China. In November, SAIC unveiled a luxury smart car brand IM in partnership with Alibaba and Shanghai’s Pudong New Area, aiming to compete with Tesla. IM unveiled its first two models in January, which are set to begin deliveries in 2022.

From simple electrification to empowering cars with artificial intelligence, the EV industry has gone a long way to make itself more convincing and attractive to consumers. Declining battery costs have also made electric cars more affordable.

Tesla blazed the trail. Thanks to its new China plant, the EV maker has been able to expand production while cutting costs. Tesla’s launch of a remote vehicle upgrade service using over-the-air technology — allowing users to purchase and download software packs to upgrade their vehicles anywhere — also provides a promising profit model for EV makers.

According to Essence Securities, Tesla’s sales of full self-driving installations through over-the-air technology totaled $950 million in 2020. Revenue is expected to rise to $14.2 billion by 2025, the brokerage house said.

The rise of electric smart cars poses unprecedented challenges to a traditional carmaking industry that is built around internal combustion engines. For decades, conventional auto companies competed on heavy investments in technologies for engines, transmissions and complex powertrain systems, which raised significant barriers to entry for potential rivals.

The disruptive changes brought by the new technologies pose dramatic challenges to traditional automakers. Conventional auto companies are about two years behind EV startups in terms of technology know-how, one automaker employee said.

The biggest challenge facing traditional automakers is to revamp their entire operating systems to fit the needs of new auto development, in which research and development will outweigh manufacturing.

Nevertheless, there is a long way to go for EV startups to become dominant players in the auto industry as most companies are still struggling with production and technology limits.

Major electric smart cars currently available on the market can achieve only autonomy Level 3, meaning the driver must remain alert and ready to take control. More investment and research are needed for smart cars to truly become self-driving, experts said.

Construction and operation of EV charging facilities has remained a lukewarm business in China due to its uncertain profit outlook, experts say. It has become the Achilles’ heel of China’s EV market expansion, they say.

Qin Min and Yu Ning contributed to this story.

Caixinglobal.com is the English-language online news portal of Chinese financial and business news media group Caixin. Nikkei and Caixin have an agreement to exchange articles in English.