“The reports of my death are greatly exaggerated.” – A phrase originally uttered by Mark Twain but also applicable to the perceptions of the current freight market.

A sharp and extended pullback of spot market rates, coupled with a surge in the price of diesel fuel, has sounded alarm across pockets of the industry, but that concern hasn’t yet widely tricked down to fleets, many of which are still standing in line for new equipment that truck and trailer OEMs simply cannot build fast enough.

ACT Research Vice President Steve Tam said just more than 11,000 Class 8 truck orders have been canceled this year versus an order intake of about 64,000 over the first three months of 2022, and just under 4,000 trailers compared to orders of more than 91,500. March’s trailer cancelations were the lowest this year, according to Tam, while truck cancellations dropped 1,500 units from February highs.

“While it might not be completely obvious, cancellation activity is essentially a non-issue,” Tam said. “Most of the activity is actually the OEMs performing housekeeping – that is, cancelling orders for previous model year equipment and replacing the order with a corresponding new order. Simply put, demand remains solid, not impacted by the current slowing freight growth environment. Freight is still growing, just at a slower rate. In the near term, the decline is from historical highs. Relative to the longer term, growth remains intact.”

Fleets have been waiting to get enough new equipment for over a year, noted Don Ake, FTR’s vice president of commercial vehicles. “To cancel and get out of the waiting line at this point, with pent-up demand so high, doesn’t make much sense,” he said, estimating pent-up demand for trailers alone to be as high as 100,000 units.

“Yes, freight has eased off from the robust growth we saw coming out of the economic restart, but freight volumes continue to grow,” Ake added. “FTR is forecasting Class 8 freight growth to remain at healthy levels this year and still be just under 3% next year. Of course, there are risks to this forecast, and if the economy eventually goes into recession, it would probably take the freight markets with it.”

Motor carriers not waiting for new assets are still paying historic premiums for used sleepers and are doing so – sans some softening in demand for higher mileage equipment – without hesitation. J.D. Power Senior Analyst and Commercial Vehicles Product Manager Chris Visser noted that while fleets and lending institutions are taking a more “mature” view of the industry, “there’s still a high volume of freight to move and a lot of buyers for used trucks. I doubt anyone’s making major changes currently, but this quarter will be pivotal.”

In the late 2018 down cycle in truckload rates, used truck pricing took upwards of 8 months from the start of the downturn to show heavy impact, Visser said, adding that the current freight and used truck trade cycle is anything but normal “since trade is still heavily impacted by overseas shutdowns and the used truck cycle is still impacted by tight new truck availability,” he said. “If freight volume and rates continue to decline and we have more new truck delivery months like March, used truck pricing will start moving more notably. But those two factors are far from guaranteed. We’re basically flying blind with very little historical perspective to draw from.” 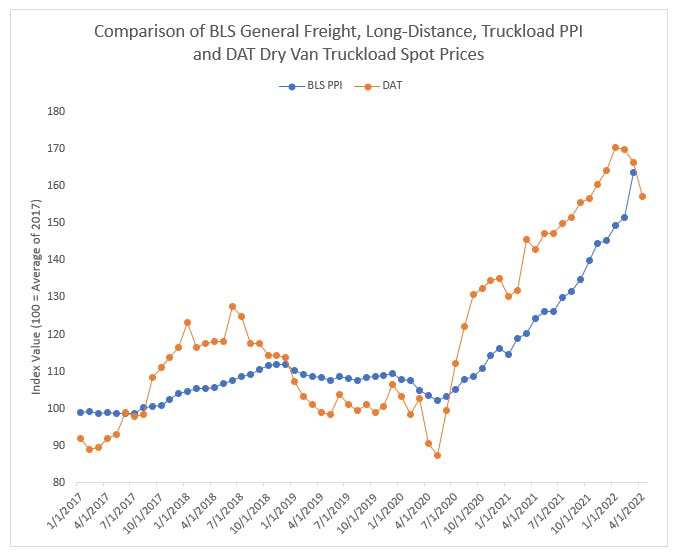 In the chart above, Jason Miller has converted DAT’s headline (linehaul + surcharge) dry van rate to an index and plotted it relative to the Bureau of Labor Statistics’ Producer Price index for general freight trucking, long-distance, truckload. “Note how we saw very rapid closure over the past few months,” he said. “Granted, the March reading from BLS may be revised heavily, but I think this helps explain why spot freight is no longer as attractive as it once was. I increasingly believe this is the most important factor explaining the sharp drop in spot prices.”

Asset acquisition aside, Jason Miller, PhD, associate professor of logistics in the Department of Supply Chain Management at Michigan State University’s Eli Broad College of Business, said there is a lot of fundamental strength in the trucking industry’s underpinning. Miller pointed out that contract rates have soared over the past few months, which subsequently explains – in part – the recent spot market pullback.

Credit card spending, which reached the lowest point this year in March, is trending on track to rebound in April, giving rise to optimism in the spot market going forward. The number of loads posted to the DAT One load board network increased almost 7% during the week of April 17-23, the first significant week-over-week increase in load availability since the end of February.

“It appears, at least based on [U.S. Bureau of Economic Analysis] credit card spending data, that there was a pause for many sectors in the start of March 2022 that could have contributed to spot rates falling sharply at that point in time,” Miller said. “We are starting to see the market normalize, especially on retail. We aren’t seeing pronounced year-over-year gains in sales, and in most sectors of retail, once we remove inflation, sales are now down from 2021,” but still way above 2019 levels,” Miller added. “Examples include furniture and home furnishings; sporting goods, hobby, musical instrument and bookstore — yes, that is a real industry category; other general merchandise; and non-store retailing (e.g., pure-play e-retailers).”

Miller noted that spending cooled in the first half of March (right when oil prices exploded) but has since recovered. “When did spot prices in trucking start to steeply fall? The first two weeks of March,” he said. “I don’t think this is completely a coincidence. My hunch is we saw a pullback of some retail freight that caused downward pricing pressure.”

The past three months “have been a tale of the haves and have-nots” when it comes to volume growth, said Lee Klaskow, senior freight transportation and logistics analyst at Bloomberg Intelligence, adding “load growth could trend higher sequentially into May, providing some support to spot rates.”

Carriers indeed are optimistic about growth in volume and rates this year, despite rising fuel and equipment costs, according to the latest Bloomberg/Truckstop.com survey of small fleets and owner-operators.

About 72% of respondents expect load growth over the next six months compared to 71% to close out 2021 and the first quarter a year ago. Temperature-controlled carriers were most optimistic with 77% expecting higher volume, followed by 74% of flatbed carriers who are benefiting from a strong housing market and infrastructure development.
There’s less optimism with regard to rates. About 55% of respondents expect spot rates (minus fuel surcharge) to climb in the next six months versus 59% in the fourth quarter of last year. About 14% of carriers expect rates to decline over the next 3-6 six months, in line with historical averages. Only 2% expect rates to drop quickly this year. Another 32% expect them to slowly moderate.

Rates and loads aren’t even carriers’ top concern. That crown goes to fuel. About 56% of carriers surveyed by Bloomberg and Truckstop.com said that higher fuel costs are the industry’s biggest challenge. Lower rates are the second-biggest concern in 2022 at 21% of the sample, followed by the weakening economy (16%). Despite these concerns, about 69% of those surveyed anticipate the truckload market will remain tight this year, a positive for carriers.